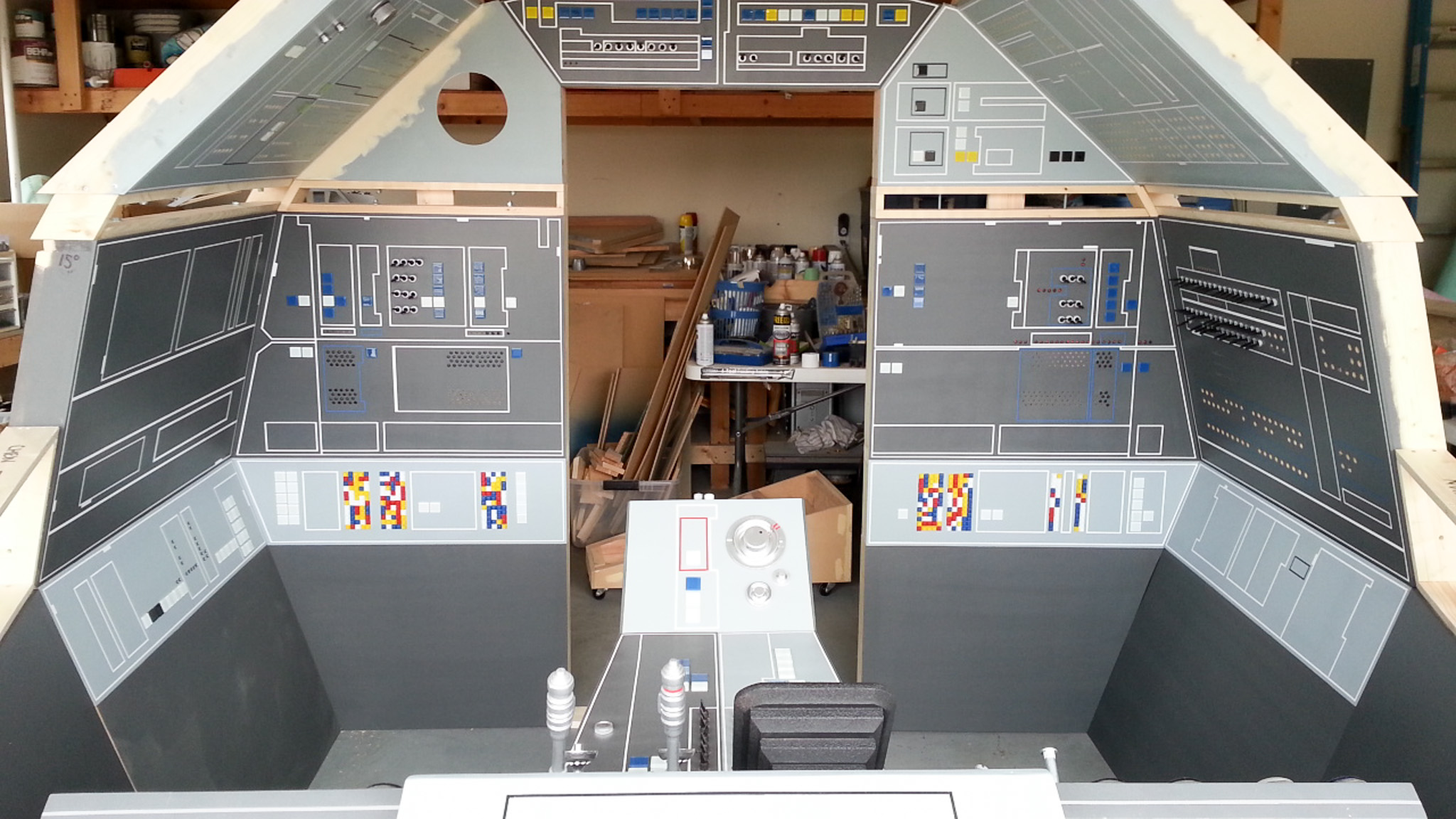 Chris Lee is a man with a mission, one which is possibly the nerdiest and most ambitious crowdsourced fan project ever conceived. Lee is spearheading an epic quest to construct a full-scale replica of Han Solo’s iconic ship, the Millennium Falcon. You know, the one that made the Kessel Run in less than 12 parsecs. It’s going to be big. Really big. Three stories tall, 114 feet long, and 81.5 feet wide.

To achieve this goal, he has the help of a ragtag band of committed Star Wars fanatics who are scattered across the Internet. Like-minded folk from as far away as New Zealand, Japan, and the UK are contributing to the project, with their assistance ranging from physical construction and modeling work to 3D design and engineering support.

“As far as rallying the team, once I made the project public, they found me,” says Lee. “It was as if many people have had similar ideas and were happy to find they weren’t alone in that desire. In a way, we are crowdsourcing the construction of something that no one person would be able to do on their own.”

There’s a bonus if they ultimately complete the 1:1 scale model. During filming of the original movies, there was never any need to build the full ship. The original set pieces used for episodes 4 to 6 were scrapped after Return of the Jedi. If he and his collaborators ultimately finish the spacecraft, they will have the only Falcon in the universe.

A long time ago, in a galaxy not so far away, 12-year-old Chris Lee sat down to watch Star Wars on the big screen and absolutely fell in love with the film’s gritty sci-fi conflict and distinctly different worlds spanning the galaxy in competing alliances. “[For me] Star Wars introduced the idea of a ‘used universe,’ where the settings and technology felt more lived-in and believable,” he recalls. “The tale being told…from the perspective of a teenage farm boy hit home, since at the time I was living on a farm on the cusp of adolescence.”

The experience resonated so strongly that even now, at 47, Lee still spends much of his free time immersed in projects tied to George Lucas’s venerable series. From cobbling together working bots for his R2-D2 Builders Club to donning Stormtrooper garb as one of the original members of the 501st Legion, Lee keeps plenty busy outside his day job as a vice president of technology for an interactive software company.

The Falcon has kept its resonance for him decades after his first viewings. “It’s the equivalent of the muscle car or hot rod in sci-fi,” he explains. “It’s one of the most recognizable and beloved ships in sci-fi. From the moment I first heard Luke Skywalker call it a piece of junk, I felt exactly the opposite — that [the Falcon] was the coolest thing I’d ever seen and [that I] had to have one someday.”

An avid tinkerer and crafter, Lee says the Falcon is just a logical next step — albeit a huge one — in his ongoing love of juggling endless projects. “I’m always happiest when I’m in the middle of a project,” he admits. “I’m a maker at heart, so I get equal satisfaction from the process as I do from the finished product.”

Still, it’s a task daunting in its scale, cost, and time, with no assurance that it can ever be completed. But it’s not quixotic. Lee has the support and interest of a large community — and the full backing of his spouse. 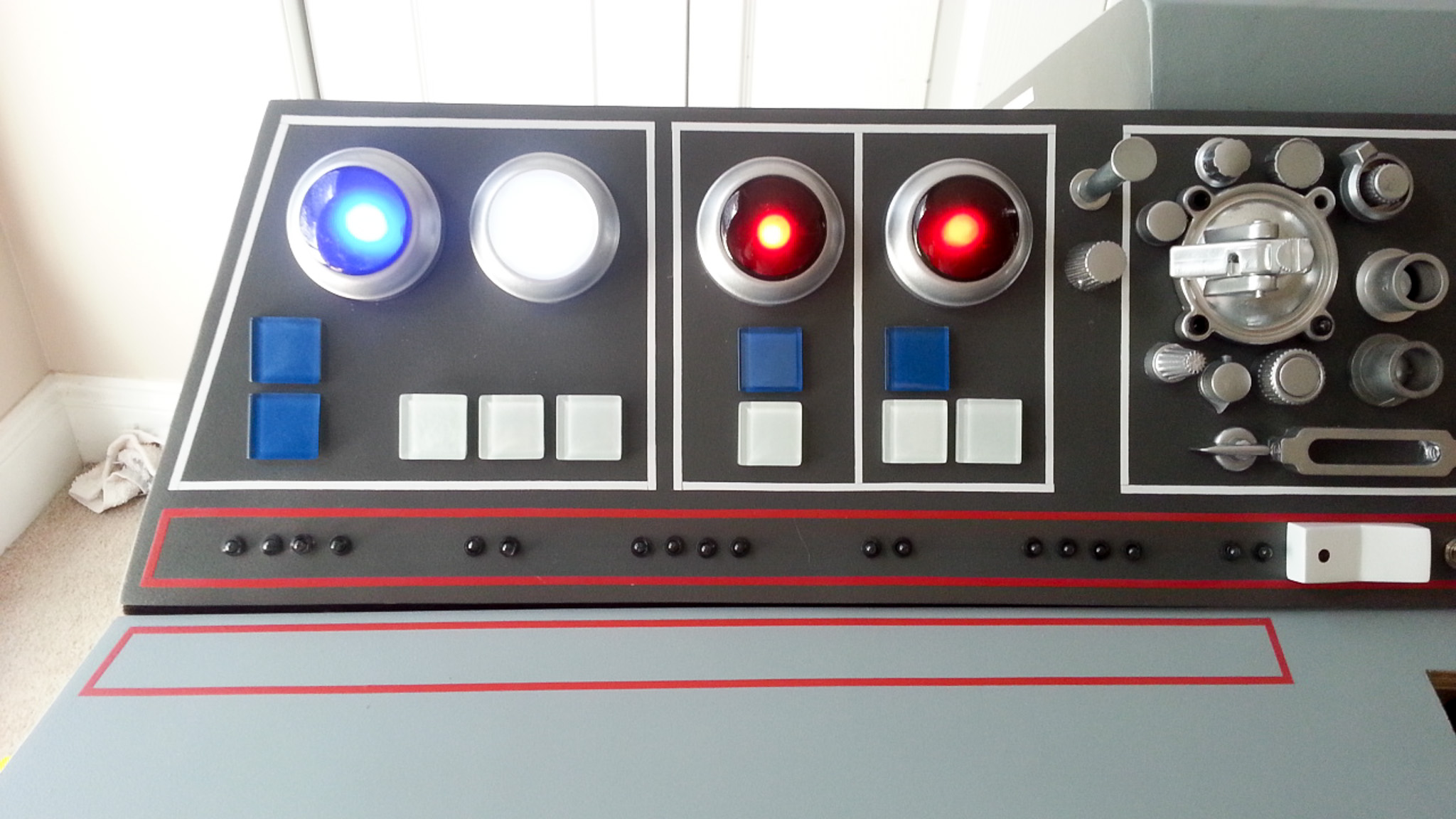 Lee has an expansive collection of Star Wars memorabilia that he displays in his house in Nashville, Tennessee. It’s also no coincidence that he shares that home with a Princess Leia doppelgänger, Leah D’Andrea. The pair first met at a Star Wars fan convention, introduced by a mutual friend who was assembling a fully costumed, original-protagonist cast of Star Wars: A New Hope. D’Andrea, a costume and fashion designer, regularly attends cons as the series’ grimly determined yet wisecracking heroine, and she’s every bit as much of a Star Wars super fan as her husband.

“I was a big Expanded Universe reader,” she explains, referring to the extensive series of published fan novels that explore the Star Wars universe and characters beyond the films. “I wanted to know what happened to Luke, Leia, and Han after the movies ended, so I tore through all the books that were available at the time.

“At first, I was a big Luke fan. Then as I grew older and saw more of the world around me, it was Princess Leia that kept me coming back. She was fierce, intelligent, and sassy and earned such loyalty from those closest to her, all while being feminine and diplomatic. I wanted to embody those qualities as well,” she says.

Lee already had the idea for the full-sized Falcon in his head when he met D’Andrea, and she recalls listening in rapt attention while he explained the project over drinks at Star Wars Celebration IV in Los Angeles in 2006. (Lee sprang a proposal on D’Andrea at Star Wars Celebration VI in Orlando last August and gave her a replica of a necklace Leia wore in the movies. She accepted, and they married two weeks ago.)

“Admittedly, as I thought about it later, I had a hard time really bending my mind around the whole thing,” she says. “He didn’t have overall dimensions then, so it was just this globulous thing that I knew was going to be awesome.”

While D’Andrea loves the idea, some people think Lee is more than a little nutty for embarking on this tremendous and quirky undertaking. He’s the first to agree. “Yes, I have completely lost my mind, just like most of my friends and family say,” he jokes on his Web site for the project. “Except for those close Star Wars fan friends, who ask, ‘Cool, can I help?’”

In 2005, Lee purchased an 88-acre plot of land about an hour west of his home on which he plans to permanently install the Falcon. Nestled on a concrete foundation and reinforced with steel, the gargantuan spacecraft will be meticulously detailed inside and out. Lee notes that it will be plenty large enough to show up on Google Earth.

Lee has made substantial progress on clearing the site, planning out the specs, and getting a start on constructing pieces of the ship thanks to likeminded comrades willing to volunteer their time, energy, and materials to make the project a reality. His battle plan is simple: recruit hardcore sci-fi fans from around the world to build the spacecraft in individual chunks, then bring everything together and assemble it on-site.

About 111 miles south of Nashville, fellow model-building and Star Wars enthusiast Greg Dietrich spends weekends tinkering away at components for the Falcon’s cockpit in his garage in Huntsville, Alabama. A graphic artist by trade, Dietrich grew up enamored with building models. Many of his favorite model projects included iconic Star Wars spacecraft, like Luke’s X-wing fighter, TIE fighters, and, yes — even the Millennium Falcon.

A little over a year ago, Dietrich decided to get back into model making, and stumbled upon Lee’s holy grail of Star Wars model-building projects. When he discovered the Falcon project, he knew right away that he had to get involved. “I had heard of several projects being done, but nothing at this level or scale,” he says. “My jaw dropped. I wanted in! Period.”

At first, Dietrich signed on to contribute to the project by building just the center console from the ship’s cockpit. He figured he’d complete it, donate it to the building, and be part of geek history. But then he got hooked, and things quickly spiraled out of control.

“Well, the console turned into just a little more building here [and] there. Next thing I knew, I had an entire cockpit and quad laser sitting in my garage,” says Dietrich, who continues to work on it as he has time. “As a kid, I always dreamed of sitting in the cockpit and pulling the throttle levers back, pretending to jump into hyperspace and hoping to avoid the dreaded Imperial Fleet. I think we’re going to make it happen.”

All of the components are being designed to very precise specifications to ensure that the starship is both authentic and feasible to put together. Dietrich’s laser-precise attention to detail is displayed in his painstaking handiwork — every switch, button, light, and lever is positioned just so. He posts progress photos on the project’s Web site, documenting the evolution of bolts, plastic bits, paneling, and other junk into an intricate model conjuring pulse-quickening nostalgia. Through his photos, it’s easy to see the ship coming to life one piece at a time. 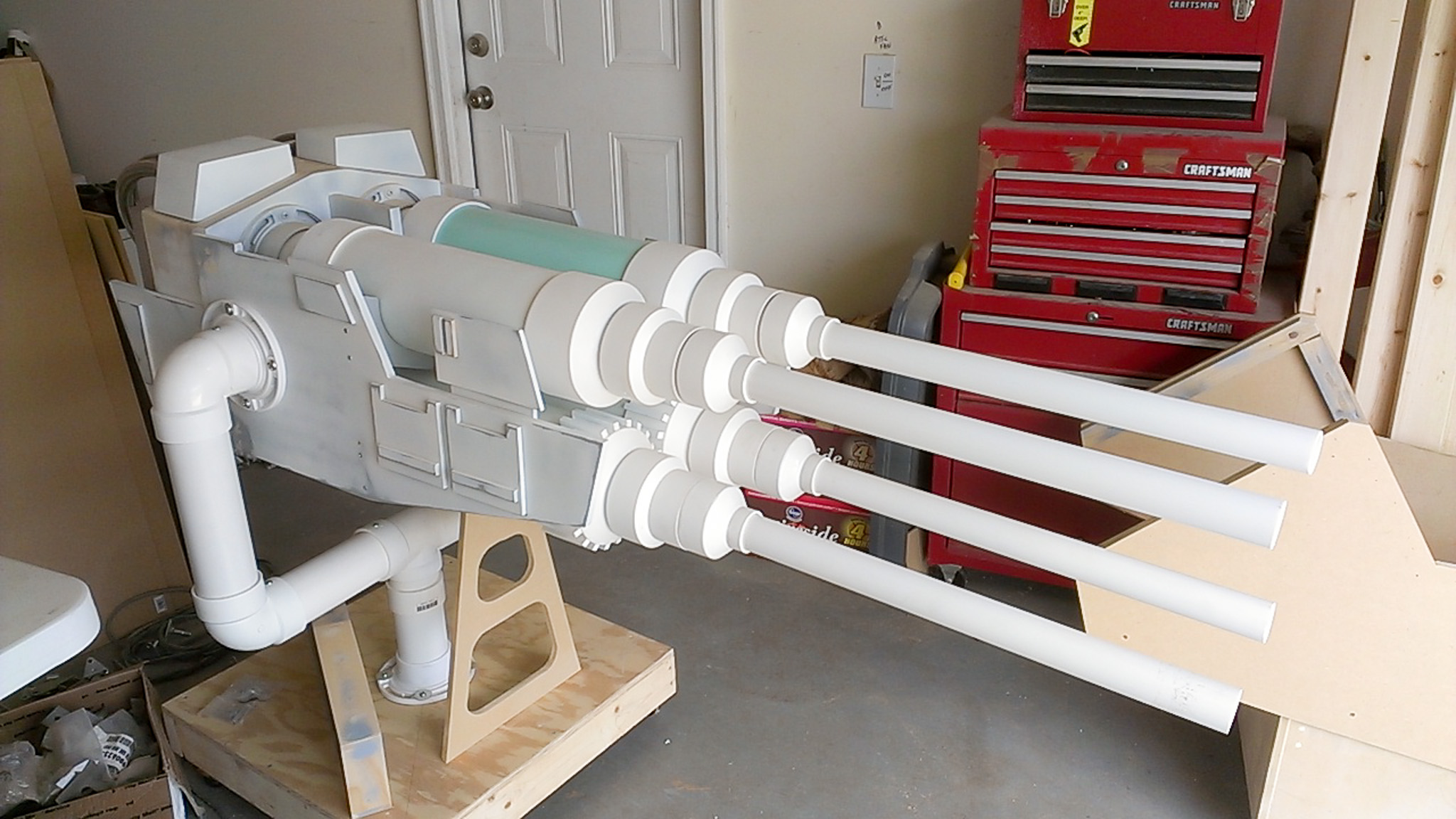 Completion of the Falcon isn’t assured. So far, Dietrich is the most committed participant besides Lee on the build side. But with the current level of interest and with demonstrations of ongoing progress, Lee has little doubt the Falcon will occupy its perch some day.

Lucasfilm doesn’t appear to be standing in the way. The company, sold recently to Disney, is aware of the project, and Lee says he has had numerous conversations with his contacts there to ensure he’s operating within their rules and guidelines. The studio is supportive of the group’s all-volunteer efforts, as long as it remains a fan-driven project. As such, his team isn’t soliciting any public funding out of respect for the relationship and intellectual-property rights. (Lucasfilm didn’t respond to our request for comment.)

While Lee hopes the completed Falcon will serve as a rallying point for fellow Star Wars enthusiasts and as a source of pride for everyone involved in creating it, that’s not the full extent of the project. Beyond the Falcon itself, Lee and his group plan to explore ways of using the 88 acres of land where the starship will be housed as a creative retreat with facilities for classrooms, workshops, lodging, and recreation.

The idea is to turn it into a maker camp where creative folks can share knowledge, hold workshops, and gather together. Exactly what shape that’ll take or how it’ll come together is still on the back burner. For now, the group has its hands full constructing the galactic hot rod that’ll serve as the cornerstone for the whole thing.

“I’ve always wanted to make my mark on the world with something physical and architecturally significant that others would find just as compelling and significant as I do,” says Lee. “The involvement of others and opportunity to make new friends as a result of the project are great motivators.”

Building the fastest hunk of junk in the galaxy in your backyard? That’s a great place to start.

Freelance journalist, author, and beer nerd Nathan Meunier slings words about video games and geek culture for a living. He's been published everywhere from Nintendo Power and Mac|Life to IGN and GameSpot. He rolls natural 20s.