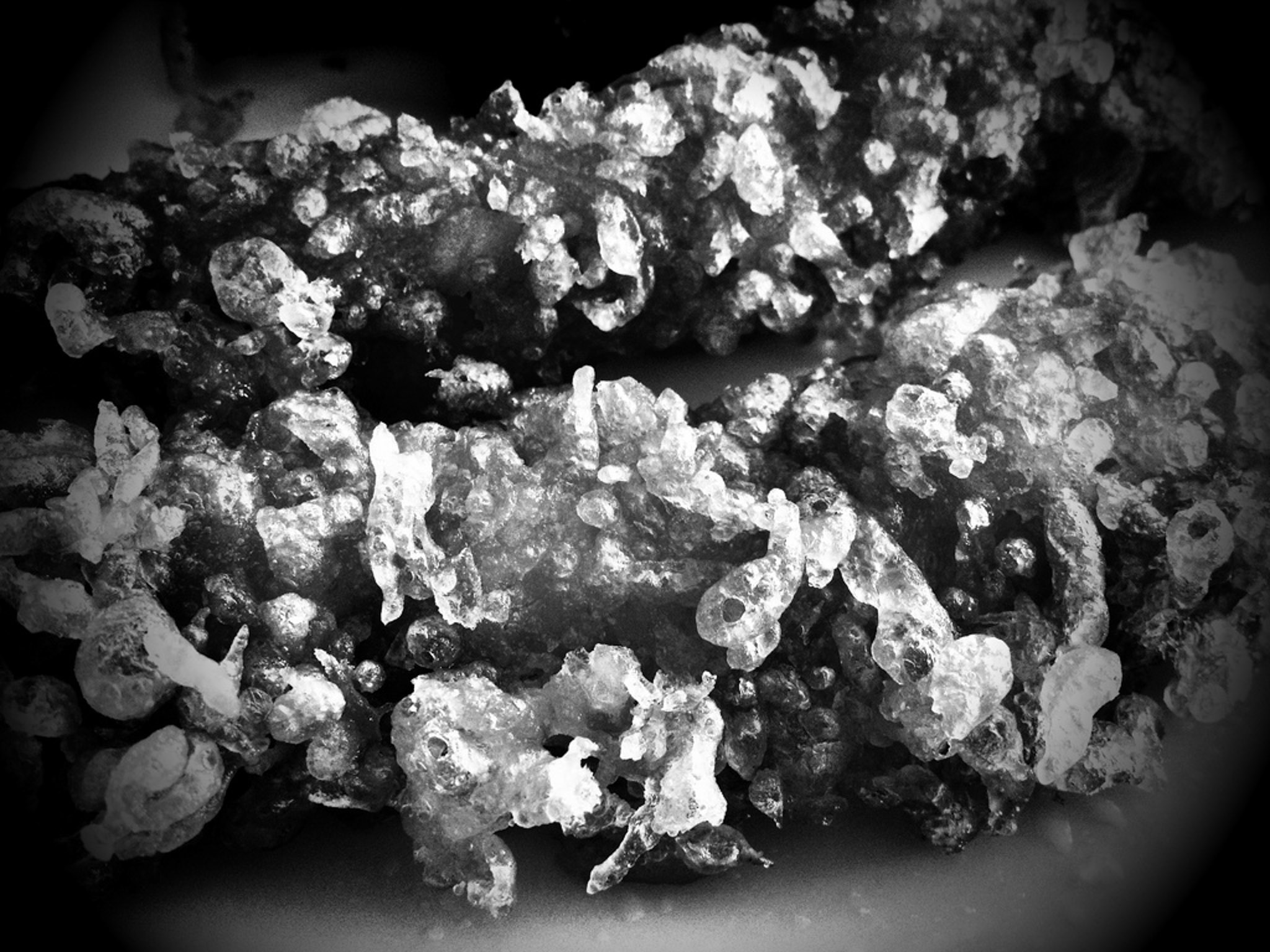 The chef at Tenta is always smiling, even when he’s just been hit with orders for a dozen different types of tempura, many of which require prep work and unique cooking times. For example, one night I ordered kisu (a small whitefish, one of my daughter Iris’s favorites), green pepper, shiitake, shrimp, kabocha squash, and lotus root in rapid-fire succession. He didn’t flinch.

Before he started cooking, he placed a plate in front of each of us and topped the plates with metal cooling racks so the underside of each piece of tempura would stay crispy. He pulled a length of daikon out of the fridge, grated it on a flat grater, and passed us each a bowl of freshly grated daikon to mix with seasoned soy sauce for dipping. We also had a small plate for gray sea salt.

Tempura chefs mix their batter on the fly. Our guy at Tenta dumped flour into a metal bowl directly from a bag printed with smiling tempura cartoon characters, indicating a low-gluten flour. He added tap water and stirred a few times with chopsticks. Tempura batter is weird stuff: it’s not only still lumpy, but it leaves cliffs of dry flour extending up the sides of the bowl.

Overmixing is the enemy of good tempura, because it makes the coating tough and chewy, and a confident tempura chef finishes mixing the batter by dragging your shrimp or eggplant through it. By the time the food is cooked, you’d never guess that its crisp and even exterior came from a batter that looks like boarding-school cafeteria oatmeal.

Before dipping anything, though, the chef flicks a few droplets of batter into the hot oil with his metal cooking chopsticks to test the oil temperature. Later, after plunging a shrimp into the oil, he’ll repeat the motion, flicking batter bits onto the frying food to produce what might be called crispy Klingons.

Iris’s favorite item at Tenta is anago, sea eel. Unlike its freshwater cousin unagi, anago is neither endangered nor expensive. A whole anago at Tenta is about $7.50. I ordered one, and the chef pulled a live eel out of a bucket. It wriggled like, well, an eel. Iris screamed as water droplets flew toward us. The chef managed to wrestle the unruly thing into the sink and knocked it unconscious before driving a spike into its head and filleting it. He unzipped two fillets in seconds. A Provençal saying holds that a fish lives in water and dies in oil; in the world of tempura, a fish can go from watery cradle to oily grave in 10 seconds. 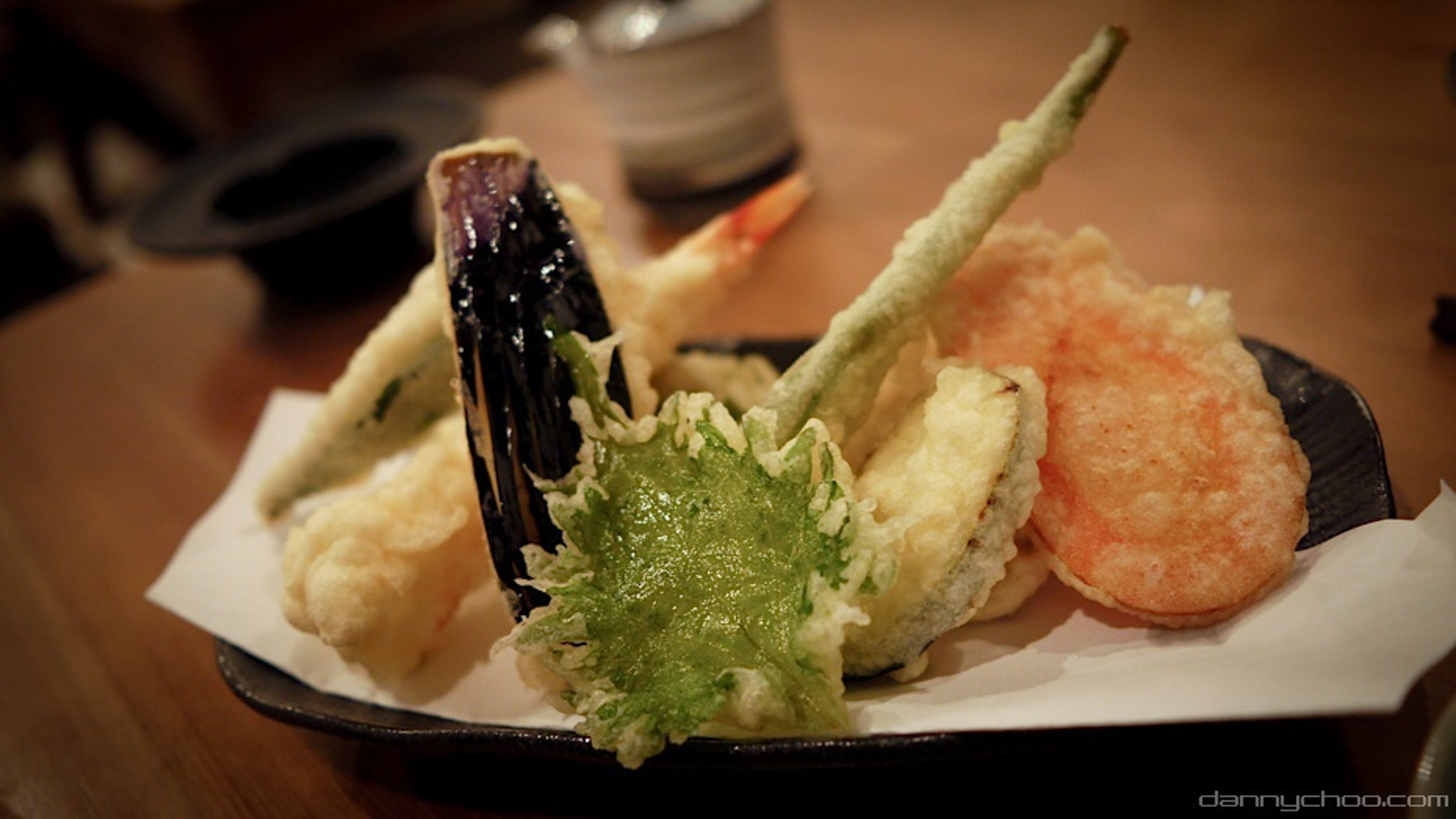 Iris loves fried eel meat dipped in salt, but this is not her favorite part of the anago. After filleting the eel, the chef takes its backbone — hone in Japanese — ties it in a simple overhand knot, and tosses it into the frying oil. “Hone,” he says, presenting it to Iris, who considers it the ultimate in crispy snack food — and this is a kid who considers taco-flavored Doritos a work of genius. (OK, so do I.)

In the United States, to have a personal relationship with a Japanese chef across the counter, you have to go for sushi. I enjoy sitting at a sushi bar, but there is always the whiff of haute cuisine in the air (or, if you pick the wrong sushi place, the whiff of something worse). You can visit an expensive, artisan tempura counter in Tokyo and order unusual and impeccable seafood, but come on: tempura is fried stuff. You drink frothy mugs of cheap beer and call for more food anytime you like. Bacon-wrapped cherry tomatoes on a stick, tempura-fried? Sure, we had that. A bowl of dozens of whole baby sardines, called shirasu? Absolutely. (Iris claimed these for herself.) Why aren’t there tempura bars in every city in America?

Like tiny restaurants everywhere in the world, Tenta opens whenever the chef is good and ready. We learned not to plan to go there for dinner at our usual 6 p.m. One night we wandered by around 6:30 and were pleased to find the door open, but when we took our seats at the bar, no chef. There was another customer, however, smoking and reading a newspaper.

About 15 minutes later, the chef walked in and gave a surprised yelp upon finding people in his restaurant. I assume he was asking himself why he left the door open.

Iris ordered her usual anago, looking forward to the fried backbone like a kid who orders a burger but is really all about the fries. The chef presented the knotted bone to her; she picked it up with her chopsticks and promptly dropped it on the floor. She had the stricken look of a kid who has just dropped her ice cream scoop but hasn’t started to cry yet: the world sucks.

We all looked down at the eel bone and wondered what to do. “Give it here,” said the chef in Japanese. I picked the bone up off the floor with my chopsticks and passed it to him. He rinsed it off in the sink, threw it back in the fryer, salted it, and set it on Iris’s cooling rack.

Seattle food writer and regular The Magazine contributor Matthew Amster-Burton spent a summer with his family in Tokyo. In his book Pretty Good Number One: An American Family Eats Tokyo, he tells unexpected stories of food and life in the world’s biggest city. This was one of them. You can hear him read part of the book in this audio from Lit Crawl 2013 in Seattle.

Matthew Amster-Burton is a Seattle freelance writer covering food and personal finance. He has written for Gourmet, the Seattle Times, and the Wall Street Journal, and writes a weekly column for Mint.com. His new ebook, Pretty Good Number One: An American Family Eats Tokyo is now available.