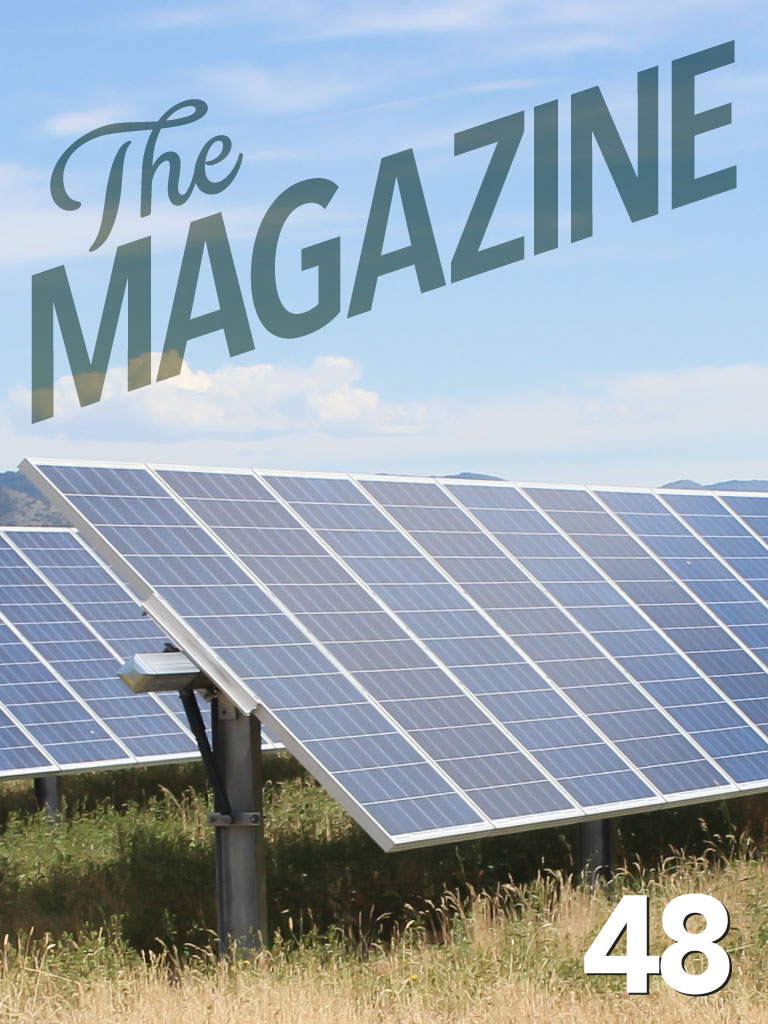 Attentive readers on an iPhone, iPad, or iPod touch will notice a change if you have automatic app updating turned on or chose to manually refresh our software. The Magazine has upgraded our app, which is fed by a new underlying publication platform. (If you don’t see the update, launch the App Store and tap Updates; or, if you’re reading this online, download our app.)

We launched in October 2012 as the brainchild of Marco Arment, Tumblr’s first employee and the developer of Instapaper. Marco wanted a lightweight periodical app that facilitated reading and quick downloads, so he created it, and he served as its initial editor, assigning articles and shaping an editorial philosophy.

He hired me during Issue #2’s production, and I took over the day-to-day editorial operations. In May 2013, he felt ready to move on and sold me the publication. I’ve been running it with managing editor Brittany Shoot’s able assistance ever since. (Marco turned to a different media field, creating the Overcast podcasting app, which just shipped.)

I’ve released a few updates since then with the help of my friends at Aged & Distilled and Pacific Helm. But the fact is that app development is expensive, and while I can handle server-side programming (our back end is based on PHP), I am not an iOS developer, and the cost of keeping the app up to date and expanding into new, requested features far outstrips our budget.

It also doesn’t make the same sense in mid-2014 as it did in mid-2012, when there was no model for a periodical app that wasn’t bloated, derived from print layout pages, and lacking features that Marco (and later I) found critical for just plain reading. That’s changed: Marco helped craft a template that others have picked up on. (Craig Mod wrote about this extensively in his essay “Subcompact Publishing.”)

A few months ago, I began to talk to the friendly folks at TypeEngine, who had been incredibly supportive and generous with their time for many months. We met to talk about platforms, and we quickly realized that what I was doing was compatible with their product: TypeEngine is organized around “atoms” of articles and issues, and it relies on the Markdown specification for formatting text. They had a roadmap of features I could never afford as a solo operation, several of which you will see in this release, and with more to come.

We worked bit by bit over several weeks to figure out what quirks of my system needed to be preserved, while they labored on a major update to their publishing platform, which just shipped. The app you’re using, if it’s marked version 2.0, is the result of that collaboration. Much of the look and feel of The Magazine’s app was possible inside the existing TypeEngine system, and pieces that weren’t were added to bring more features to all the publications they work with.

This new app will help us continue to provide the quality writing, photography, and illustration you’re accustomed to, while adding features you’ve requested. It also means we’ll have a team ready to make the transition to iOS 8 when Apple releases it later this year.

If you like us and the new app, consider leaving a review on the iTunes Store. Your reviews provide guidance to visitors deciding on whether to give us a try.

(Note to iOS 6 users and those who choose not to update to the new version: our plan is to continue to support our 1.x release of the app indefinitely. You will no longer receive notifications, but you will be able to download issues. If you’d like to be informed via email when new issues appear, sign up for our low-volume email announcement list.)

With the new app, there’s a new subscription model, along with a transition plan to make current and past subscribers happy. Up until this issue of The Magazine, subscribers have had full access to everything we publish, new and old, but only with an active subscription. Anything you downloaded, you could keep, but we had no system in place for permanent ownership. (I took care of people one-on-one who needed missing downloads after subscriptions ended.)

Starting today, subscribers will permanently own every issue that comes out during an active, paid subscription. Back issues will be sold individually and in bundles, and each new issue will be available as a single-issue purchase to non-subscribers. Automatically renewing subscription plans will remain $1.99 a month and $19.99 a year, while individual issues will cost $1.99.

However, to make this transition work, we’re opening up our archives — everything from Issue #1 to Issue #46 — for free downloading until August 29, 2014. Anyone who downloads the new version of our app, whether a previous or current subscriber or just a browser, can read our archives. Issue #48 (this one), #49, and #50 will be part of subscriptions and available for sale during this limited open-archive period.

Downloading the issue will mark it as “owned,” and then you can re-download it in iOS on any device with the same account in the future, or read it on our Web site with the same login. On our Web site you can also download ebook editions, as EPUB or Kindle-compatible MOBI, of any issues you’ve downloaded in the app.

This change should answer a request we’ve had for a long time from subscribers, while also letting people who just want a single issue, or who want to buy an issue now and then, to obtain an issue without a subscription commitment. We’re also offering a non-recurring two-year bundle: get Issues #1 through (upcoming) #52 for $49.99.

During and after our 30-day “get to know us” period, we will still have a one-time seven-day free trial for signing up for a paid subscription, whether via our app or our Web site.

We’ll also be changing the login system on our Web site to harmonize with the app. Instead of using our old password-free system, which relied on sending an email link you could click on, we’ll be offering a straightforward email and password login. iTunes Store subscribers who want to access our Web site will be able to link an account in the app.

All current subscribers via our Web site, Kickstarter backers who obtained a subscription, and recipients of a gift subscription should have received an email by now (check your filtered mail folders if you didn’t) with a link to create a password. You can also visit our Web site’s login page and simply enter your email address and click Login. With the password field blank, you’ll be sent a link with which to create your password.

Eastern Oregon is an improbable place to find tree huggers. The eastern halves of Washington and Oregon tend to vote heavily Republican and favor anti-regulatory policies. Yet among the scrub and cows, an entire county is pursuing the goal of becoming carbon neutral and energy self-sufficient.

Lee van der Voo looks at Lake County, Oregon, a land of abundant heat beneath the ground, wind above it, and sun beating down in It’s Easy Being Green. The county and its seat’s strategy shows how good business can bring fringe benefits without fringe politics.

What makes a nation? Our Scottish correspondent Carolyn Roberts asks Dot Scot or Not? as the independence vote looms in September. The .scot domain is poised to launch to the public days after the vote, regardless of the outcome. Will .scot be a rallying place for the country’s unique and separate culture and community — or the foundation on which its independent digital identity is built, as it sheds the United Kingdom and .uk? We’ll find out.

When Justine Ickes was a child, her father encouraged Breaking and Entering — but only for ideas, not burglary. Justine and her parents tromped around homes under construction as her father made notes for castles he never quite built.

Regular contributor Amy Westervelt writes about Child’s Play: new uses of virtual and augmented (overlaid) reality that show kids just the consequences in the environment of human actions. Studies show that these simulations elicit greater engagement and concern than any lecture, movie, or even not-quite-natural nature visit. (Amy wrote this article as part of her work at Climate Confidential, and we reproduce it here with her permission.)

Finally, a mystery lay in a book of photographs of men in a war. In World War II, Theresa Everline’s father was part of a Blue Train group, mobile photographic labs that processed millions of aerial reconnaissance photographs crucial to bombing raids and ground attacks, helping lead the Allies to victory in Europe. But scant information remains about the men and their actions.

We love hearing from you. In the app, tap the gear icon and then tap Feedback. You can tap Email to send us a message, or tap Twitter, Facebook, or Website to communicate with us by those means. (If you don’t see the gear, tap in the middle of any article page.)

You can also email us directly with your thoughts and critique. We also read comments and questions on Facebook, Twitter, and Google+. (Although we see iTunes reviews, we cannot respond there; please contact us directly with any issues that need a response.)

Glenn Fleishman is the editor and publisher of The Magazine, and contributes reguarly to the Economist, Boing Boing, TidBITS, and Macworld. The father of two, Glenn won two episodes of Jeopardy! in 2012, and he won't let you forget it.